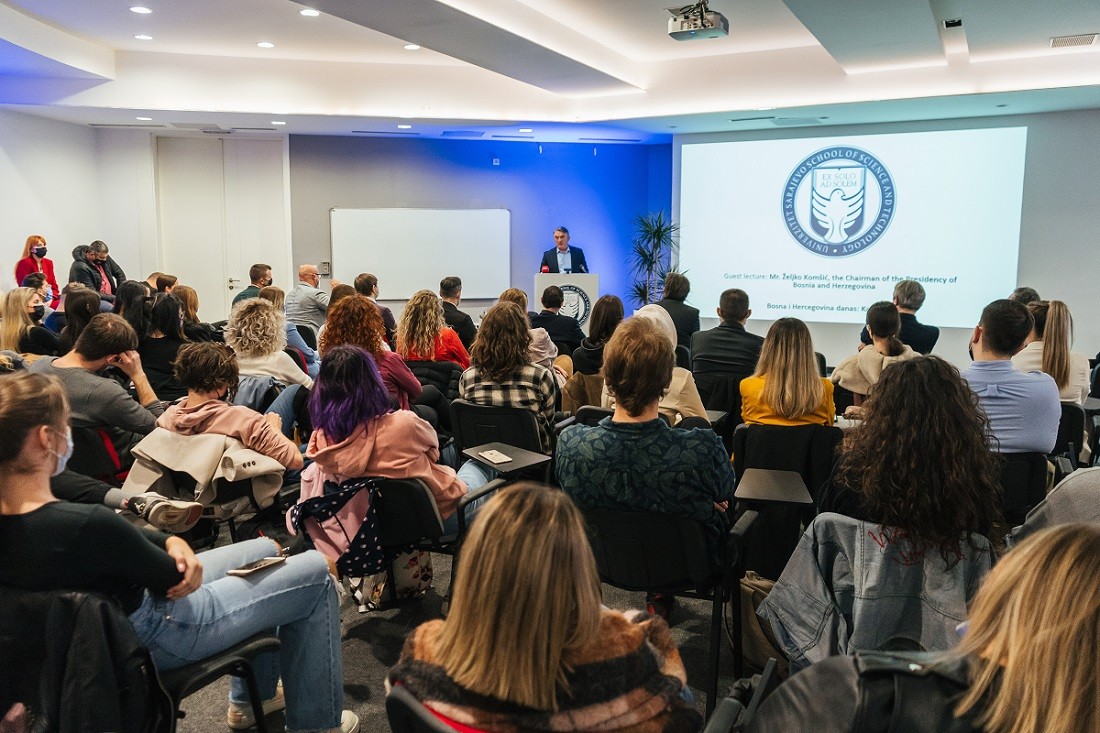 The Chairman of the Presidency of Bosnia-Herzegovina, Mr. Željko Komšić held a guest lecture at the University SSST

It was a great honour to welcome distinguished Mr. Željko Komšić, the Chairman of the Presidency of Bosnia-Herzegovina, who held a guest lecture titled “Bosna i Hercegovina danas: kako dalje?” (Bosnia-Herzegovina today: What is Next?” for many of our interested students and professors. This lecture drew a big SSST audience who had the chance to hear more on the challenges facing Bosnia-Herzegovina politically, the tensions present in public discourse in terms of this country’s current status and finally – the one thing that’s been on each student’s mind – what is the role of young people in the progress of this country, and what can the country do to keep and prevent competent, bold and talented people from leaving for good. The Chairman also reflected on the European integration processes, as well as the future perspective of Bosnia-Herzegovina in the European Union prism. He especially emphasized the role of all Bosnian-Herzegovinian citizens in shaping the right political current that could help this country rise from the yoke of nationalism, corruption and greed.

After a 60-minute lecture, professor Ejup Ganić, the President of the University SSST, took over as a moderator in a short discussion that followed between the Chairman and SSST students. Some of our students wanted to know more about how young people can utilize politics as a tool for positive change, the disunity of the Bosnian-Herzegovinian diplomatic core around the world, and what will our country face during the energy resources transition, as well as climate change issues. There were so many questions but unfortunately, since the Chairman was on a tight schedule, not all of them could be answered in this slot.

We wish to sincerely thank the esteemed Chairman and his team for their time, an extremely interesting lecture and great discussion. We have been honoured by the visit, knowing to be one of the rare universities privileged by a presidential visit. We wish the distinguished Chairman luck in the upcoming political challenges!