Fostering a Culture of Research and Development

Much more than just a teaching institution, University Sarajevo School of Science and Technology aims to make a real contribution to further development of academic disciplines within its undergraduate and post-graduate programmes, as well as to affect scientific and industry development on a national and international scale.

Our faculty is actively engaged in pursuing innovation within their fields, proposing research projects and seeking grants, publishing papers and organizing conferences, all of which creates SSST’s unique and ambitious academic atmosphere. 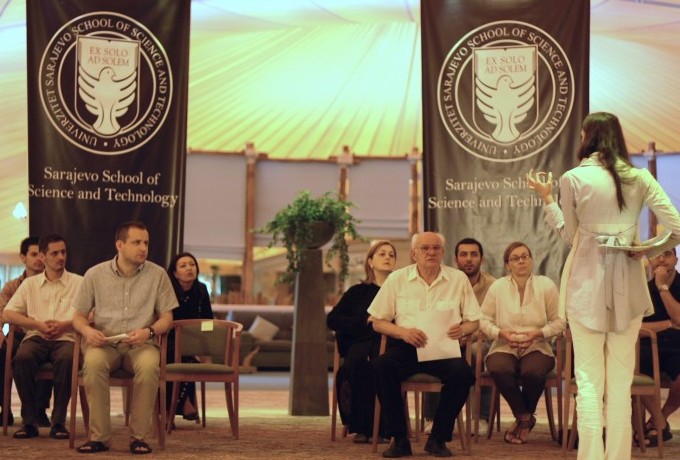 As a renowned center for the study of computer science and information systems, and especially studies in the field of computer graphics, SSST was, in 2008, awarded the organization of two very significant international graphics conferences, the Eurographics Symposium on Rendering 2008 as well as Graphics Hardware 2008.

Recent significant events include a meeting hosted by SSST and organized by the European Association of Social Psychology on “Inter-group Reconciliation: Divergent Perspectives of Perpetrator and Victim Groups,” a Google Bootcamp Weekend held in SSST’s modern conference center, and a high-profile round table discussion on the topic of: “We Care How Our Money is Spent,” as part of the Fiscal Monitor in BiH Project being developed and implemented by SSST.

Upcoming events at SSST include a large international conference, “Marking a Century since the Outbreak of WWI,” organized in partnership with the University of Buckingham and scheduled for July of 2014, and the Free Market Road Show (FMRS) in May 2013. The FMRS will be held in different cities across Europe and is hosted by the Hayek Institute and Austrian Economics Center in Vienna. As part of the Roadshow, panelists from around the globe, as well as local businessmen, journalists and academics will examine some of the most pressing economic issues facing Europe and the rest of the world.

“Currently I am working on a development project conducted for the needs of Siemens AG, Power Distribution Division. Strict deadlines, difficult and dynamic tasks are all part of everyday working environment at SSST. In Bosnia there are limited possibilities of collaboration with leading industry experts in any field. I find my work exciting as I practically work for a multinational company but without having to move to another country. Experience and references gained by working on this project are something every engineer would want to have in his CV.”

“At SSST I am continuing my research on post-conflict reconciliation processes through collaboration with my colleagues in the UK and the United States. Currently we are working on a British Academy funded project which looks at victim group responses to perpetrators' reactions to their wrongdoings. We aim to answer the question of what kind of reaction offered by the perpetrator group (e.g., acceptance of responsibility, expression of shame, guilt etc.) will ultimately produce rehumanization of the offender group in the minds of the victim group, and set the ground for improving intergroup relations.In addition to teaching and research, PS/IR Department at SSST is creating the first multidisciplinary Master Program in Conflict Analysis and Reconciliation to be offered in Bosnia, while we are continuously collaborating with governmental and non-governmental institutions working in the area of reconciliation, post-conflict restoration and peace building.”

"SSST’s MSc study programme “Computer Graphics for the Media Industry” has been developed as a part of the EU Tempus project JEP_41058_2006 for curriculum development. Among the institutions involved in the consortium of the project were the University of Buckingham, UK, as the grant holder; Sarajevo School of Science and Technology, as the grant coordinator; Universidad de Zaragoza, Spain and Comenius University, Slovak Republic as consortium members from EU; and Academy of Performing Arts, University of Sarajevo. This study program has been designed in response to a growing demand in the media industry for professionals who possess both advanced technical computing abilities and strong creative skills, blending computer science disciplines such as programming and computer graphics research, with creative themes such as character design, storyboarding, filming, directing, computer animation and compositing."
More details at: http://cgmi.ssst.edu.ba


"SSST’s Digital Media Center (DMC) has gathered the leading experts in the field of computer graphics and animation, which resulted in a number of successfully completed projects. These include a promotional campaign for the BOR Bank Sarajevo and a series of TV advertisements for BH Telecom, including one fully computer generated 3D animation. Apart from working as a multimedia production facility, the Center started a Masters programme for training students for the work in media industry and designing multimedia advertising campaigns. As a result, several projects of virtual reconstruction of cultural heritage have been successfully accomplished and presented at various International scientific conferences."
More details at: http://dmc.ssst.edu.ba . A fully computer generated 3D animation for the BiH Telecom TV advertisment -"Off Peak"

From the set for the BH Telecom TV advertisment - "IP Centrex"