A Partnership in Excellence

Through the Agreement signed in 2004, between the University of Buckingham and SSST, we have identified the mutual goals of strengthening the international profiles of our institutions, enriching our academic programmes, and providing greater opportunities and benefits to our students. This standing and ever evolving collaboration makes SSST subject to meeting not only the national, but also University of Buckingham’s and UK’s academic guidelines and standards of teaching. These standards, among other, include the anonymity of the examination procedure, the high staff to student ratio and curriculum streamlining between institutions.

The University of Buckingham validates, monitors the undergraduate and postgraduate degree programmes offered by the SSST in Political Science and International Relations, Computer Science, Information Systems, Game Design and Development and Economics, offered by the SSST and awards successful SSST graduates with a British degree.

Through collaboration with University of Buckingham, SSST is the only University in the region following the UK's Quality Assurance Agency (QAA) Code of Practice, ensuring both transparency and the highest standards in teaching and examinations procedure. External Examiners (academic staff from other leading universities in the UK) visit SSST at least once a year and review student assessment material, in order to monitor their progression in line with UK standards.

"We are proud of our association with SSST and believe the relationship we have built is to our mutual benefit. We share similar goals and visions in offering high quality education to students from all over the world, while promoting research and innovation. The independence of our institutions allows us to be creative and ambitious. SSST students receive a degree from our University – they earn that degree by meeting all Buckingham’s academic standards and we are proud of their achievements.
We share with SSST the joy of their success, particularly visible though their entry to many top graduate programmes at leading universities in the UK."

"In a short period of a time, SSST has established itself as a leading educational institution in BiH and the wider region, which is constantly evolving and improving. SSST graduates have been able to find their place in the international job market, and their quality – as assured and recognized by external examiners – is a testament to the potential of SSST. I am proud to be involved in the establishment of SSST’s academic programmes, and to be part of its progress. I am confident that long after I am gone, many other generations will find SSST an excellent University and a springboard for a successful future. SSST contributes not only to the knowledge base in Bosnia and Herzegovina, but to the international community as well."


Buckingham University is the only independent university in the UK with a Royal Charter. It was founded in 1976 by a group of Oxford academics who desired to create a place of academic innovation where the student – rather than the state – is the client. Independent of direct government support in the United Kingdom, University of Buckingham has used its independence to pioneer a distinctive approach to higher education. Founded on the principles of Classical Liberalism, the University has taught the ideals of free-thinking, liberal political thought, and maintained the independence of academia since it opened over thirty years ago. In 2014, the University of Buckingham opened the UK’s first independent medical school. Its central focus is on teaching medical students to deliver the highest level of care to patients. 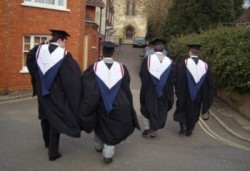 Since 2011, and for the sixth year running, the University of Buckingham secured the top spot in the National Student Survey, out of all universities in the UK.  The Survey, organized by the Higher Education Funding Council, thus reflects the great success of Buckingham’s nurturing approach to students and the policy of tutorial based, small group teaching.


The Buckingham University consistently does well in rankings because of its optimal staff-student ratios, excellent quality of teaching and the open door policy of lecturers which enables students to seek help whenever they need it.


University of Buckingham came 21st in The Times’s 2012 Good University Guide, published in 2011. This placed Buckingham ahead of Russell Group universities such as Kings College London, Glasgow, Birmingham and Manchester and showed the highest score in the country on three indicators – student satisfaction, graduate prospects and staff-student ratio. Moreover, The University of Buckingham has come top for the third year running for teaching quality in The Times and The Sunday Times Good University Guide 2018, which contains full profiles of all universities including student satisfaction with teaching quality, research quality, student/staff ratios, service and facilities spend, and degree completion rates. Buckingham, the only independent university in the rankings came 2nd to Oxford for having the lowest student-staff ratio. It also came 4th for student experience.

“Yet earlier this year this small institution was ranked 20th in the country by the Independent, while the Guardian's University Guide for 2011 ranked its business school at 2nd place (out of 112), its English department as 6th (out of 102) and its law school at 24th (out of 90). Additionally, Buckingham has routinely come at or near the top of the National Student Survey”

Despite its impressive research activities, the University of Buckingham is not scored on research – a disadvantage in the league tables. As a university that is independent and receives no funding from the state, Buckingham is unable to take part in the Hefce-funded Research Assessment Exercise. The Time’s 2012 Good University Guide states that: “It (the Buckingham University) would almost certainly have finished in the top 20, rather than just outside it, if its research could be assessed.”

University of Buckingham boasts a high graduate employment rate. In July 2011 The Guardian reported that 100% of the Class of 2010 went on to work or further study (Article: “Almost 9% unemployed six months on from graduation”, The Guardian, 15 July 2011). According to The Guardian, the latest figures show an improvement on 2010 but indicate that the graduate job market has not yet returned to pre-credit crunch levels. Buckingham is thus doubly proud that in a period of economic recession its students bucked the trend.

The University of Buckingham has come at the top of the rankings in the first-ever Teaching Excellence Framework (TEF) rankings assessed by the UK government. Buckingham has been awarded Gold and achieved a remarkable result with “double positive” ratings in all six categories. The majority of universities, over two-thirds, achieved only silver or bronze.

“For Buckingham, one of the country’s smallest universities, to come at the top of the rankings in the first ever TEF exercise is exceptional. We are thrilled to see our exemplary teaching methods receiving official recognition. Our small class sizes and commitment to quality teaching ensure our students do well when they leave. We see many of them blossom on their journey with us which is why so many say they made the right choice choosing Buckingham. The TEF result shows that students choosing Buckingham can be confident that they will have the very best in teaching quality, frequent contact with their tutors and excellent career prospects.”

Sir Anthony Seldon, former Vice-Chancellor of the University of Buckingham

Buckingham graduates have gone on to further study at most of the world’s leading universities, including Harvard, London, Oxford and Cambridge and secured jobs in senior positions around the world.

‘’Trough our collaboration with SSST we are able to mutually benefit from an established educational partnership that has its roots in a shared vision for delivering educational excellence. Since taking those first steps in 2004, SSST has grown both in physical presence and reputation in the region, with increasing links on the international stage as well. New endeavours in research and the expansion of existing provision means that students stand to benefit from a unique educational experience. 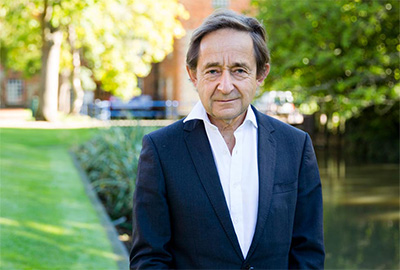 "Those who successfully complete their studies on validated programmes  also receive a degree from the University of Buckingham, proving that they have met the rigorous academic standards required. We are proud of all graduates, and share SSST’s delight in their success.

Having collaborated with SSST for over a decade, we are confident of their academic integrity, and look forward to strengthening our partnership in the future.‘’ 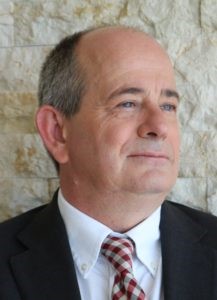 "As the recently appointed Vice-Chancellor of the University of Buckingham, I am pleased to continue the excellent partnership that we have with the Sarajevo School of Science and Technology.
SSST is now our longest standing partner, and in the past 16 years we have seen both Buckingham and SSST grow in terms of what we can offer our students. As we move into the new year, I am confident that we can build on our established foundation and continue to deliver high-quality programmes to all current students, and those who wish to join us."